I remember listening to a podcast a while back and learning about a study that examined what happened with children’s performance on tests when they received praise. After being given a test, a group of students were praised for their hard work in studying and preparing for the test and told that they did well and got a good grade. Another group of students took the test and were praised for being very smart and doing well on the test. In the end, the group of students praised for working hard ended up outperforming the group who was told they were smart when the researchers gave each group a follow-up test of equivalent difficulty. The group told they were smart ended up performing worse on the second test while the group told they had worked hard performed either just as well or slightly better. What the researchers found was that children who were told they were smart and special were afraid to make mistakes on the second test, as if not doing well on the second test would reveal that they were not as smart as they had been told. The students who were praised for working hard, learning, and being good students did not have the same fear of making mistakes and doing worse, and were more willing to take chances on hard questions and apply themselves on the second test.
This experiment comes back to my mind frequently. This morning I was reminded of it after reading a quote in Ryan Holiday’s book, Ego is the Enemy. Holiday writes about the way that our ego wants instant gratification and success. The ego does not want to work hard to achieve the things that bring us glory, attention, and praise. We just want to do well and be rewarded.
The quote that brought the experiment back to my mind is specifically about the time and effort we spend talking about how great our goals and plans are. It is easy, and somewhat comforting, to think about our big exciting goals, but it is hard to actually get started with working toward our goals. We can tell people all about what we want to do and even how we are going to do it, but taking the first step and actually doing things to move forward, is much more of a challenge than all our talk would make it seem. Holiday writes,
“Our ego wants the ideas and the fact that we aspire to do something about them to be enough. Wants the hours we spend planning and attending conferences or chatting with impressed friends to count toward the tally that success seems to require. It wants to be paid well for its time and it wants to do the fun stuff – the stuff that gets attention, credit, or glory.”
All our time spent talking makes us look great. Our big plans impress people and may even inspire the people around us. The action to achieve our goals however, is dangerous and scary. Once we start working, putting one foot in font of the other and making efforts to move forward, we risk failure. Just like the children in the experiment I started this post with, when we are praised for having such good ideas, we risk failure in round  two if we actually try to be smart and do well on implementing the things we say we want to do. If we remember that the  hard work is what is important, and focus on that instead of focusing on talking about our goals then we can address the big problems that prevent us from reaching our goal. By understanding that we might not succeed, but that we can put forward our best effort and learn along the way, we can overcome the paralysis that prevents us from turning our talk into action. The ego wants to just enjoy the time we spend having great ideas and it wants the thoughts of ideas to equal the action toward our big ideas, but we know it does not. We must remember that accomplishing (or making progress toward a goal) is what really matters, not whether our goal and the way we talk about it inspires other people. 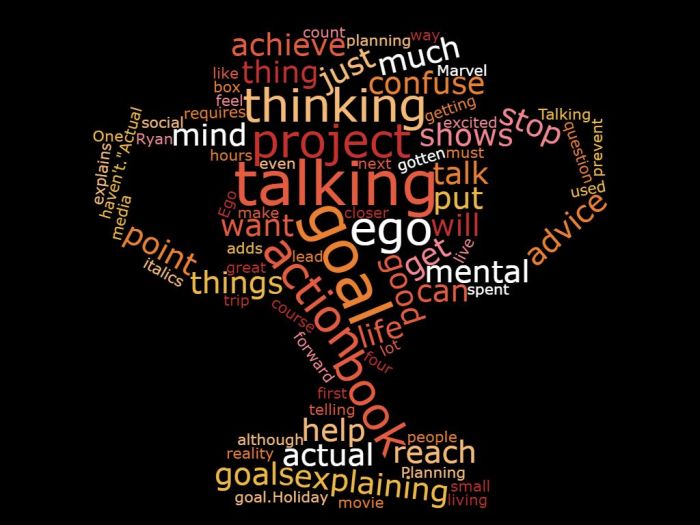 One of the aspects of Ryan Holiday’s book Ego is the Enemy that I really like is the way that Holiday helps us with strategies and advice for achieving our goals. His main focus in the book is on our ego, and how our ego can trip us up and prevent us from reach the destinations we want. As he explains the pitfalls of living for our ego, he indirectly shows us what he thinks is a good life and what we can do to live a good life. The strategies and ideas he present are simple and help build habit which I have found very helpful.
One piece of advice from the book is to talk a lot less, especially about our goals and projects. “Research shows that while goal visualization is important,” Holiday writes, “after a certain point our mind begins to confuse it with actual progress. The same goes for verbalization.” Our brains seem to confuse actual action on a project with thoughts about and talk about a project or goal. Our mental resources get used up in talking through and explaining our goal before we ever put any mental energy into the necessary steps to achieve our goal.
“After spending so much time thinking, explaining, and talking about a task, we start to feel that we’ve gotten closer to achieving it … although of course we haven’t.”
Actual action requires that we stop talking and planning. We have to stop telling people about the great thing we want to do and put forward the energy to make that thing a reality. Planning in our mind, getting excited about a project or goal, and  thinking through all things we could do to either achieve or heighten the goal is at some point just as much of a distraction for us as social media, the next Marvel movie, or that box of girl-scout cookies. We must get moving, even if the action is small and seems insignificant at first. Talking and over thinking a goal will lead to inaction and will not actually help us do the things to reach our goal.
Holiday adds a rhetorical question (italics his), “I just spent four hours talking about this. Doesn’t that count for something? The answer is no.”