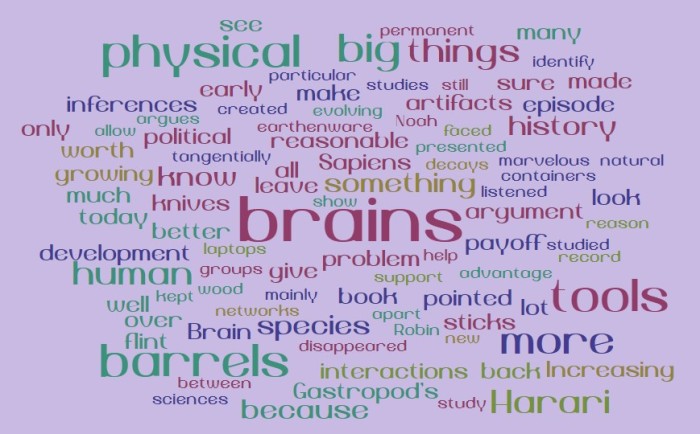 I recently listened to Gastropod’s episode about barrels, and the hosts said that we don’t know a whole lot about the development of barrels throughout human history. One reason why we don’t know too much about ancient barrels is that barrels are made of wood, which decays and disappears over thousands of years.  We can study pottery and containers for food and drink made of earthenware because it can be more easily preserved than wooden vessels. Barrels can only be studied tangentially, since original specimens are hard to come by after a thousand years of decomposition.
Gastropod’s episode about barrels represents a challenge faced in all ancient history studies and sciences. How do we learn about things that don’t leave permanent remnants behind? What is reasonable to conclude from the absence of physical artifacts? What inferences are reliable and reasonable, and what inferences are biased because we don’t have something physical that could tell a story?
Yuval Noah Harari ran into this problem in his book Sapiens. About the evolution of early human species and the development of big brains he wrote, “for more than 2 million years, human neural networks kept growing and growing, but apart from some flint knives and pointed sticks, humans had precious little to show for it.”
He explains that our brains allow us to make many marvelous things today, from laptops to skyscrapers, that give us a clear advantage over the rest of the world. Our brains use a lot of energy and our species evolved away from big muscles, claws, and teeth to support our big brains. This payoff doesn’t really seem worth it if it took more than 2 million years to get from no tools to where we are today. A few flint knives and pointed sticks, Harari argues, is hardly worth the costs of developing big brains which left us vulnerable to more threatening animals.
A problem I think that Harari runs into is that we can’t look back at 2 million years of human evolutionary history and see the things that nature wasn’t able to preserve for us. For all those years of evolution we may have only been developing rudimentary physical tools, but we may have been developing new tools that we can’t look back and see, mainly mental tools and institutions.
This is an argument Robin Hanson and Kevin Simler might make. In their book The Elephant in the Brain, they argue that social interactions, in particular complex political interactions between humans, drove the evolution of our brains. Increasing our brains so that we could better work together and develop political groups would not leave a trace we could identify through physical artifacts like stone tools.
Additionally, early evolving humans with their increasing brains may have been developing more physical items than we give them credit for. Because many of the things they created may have disappeared due to natural decomposition, we might not have a record of them. I am sure this is something that people in the field know much better than me, and I’m sure something that Harari is aware of as well, but it is not well presented in Sapiens. His argument that the evolution of the brain did not have immediate payoff in terms of physical tools that would help the species survive is still valid, but it is narrow and leaves out other important advantages that the evolution of big brains brought to humans.