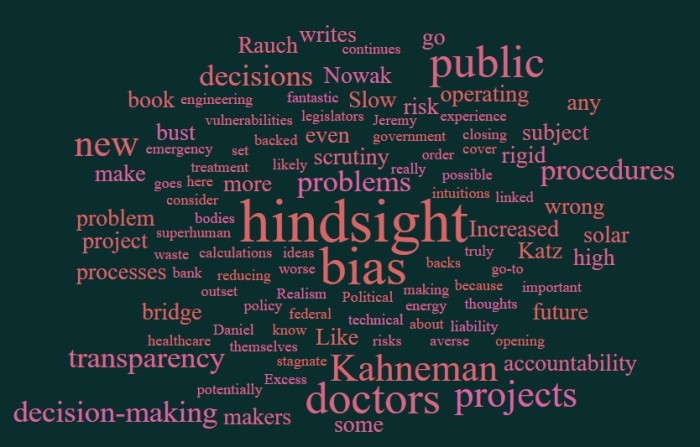 “Increased accountability is a mixed blessing,” writes Daniel Kahneman in his book Thinking Fast and Slow. This is an idea I came across in the past from books like Political Realism by Jonathan Rauch and The New Localism by Bruce Katz and  Jeremy Nowak. Our go-to answer to any challenges and problems tends to be increased transparency and greater oversight. However, in some complex fields simply opening processes and decision-making procedures to more scrutiny and review can create new problems that might be even worse. This is a particular challenge when we consider the way hindsight bias influences the thoughts and opinions of those reviewing bodies.
Kahneman continues, “because adherence to standard operating procedures is difficult to second-guess, decision makers who expect to have their decisions scrutinized with hindsight are driven to bureaucratic solutions and – to an extreme – reluctance to take risks.”
Excess scrutiny and oversight can lead to rigid and mechanical decision-making processes. This might not be a problem when we are engineering a bridge and need to make technical decisions based on known mathematical calculations (I’ve never engineered a bridge so I may be wrong here), but it can be a problem for doctors and policy makers. Doctors have to rely on their experience, their knowledge, and their intuitions to determine the best possible medical treatment. Checklists are fantastic ideas, but when things go wrong in an operating room, doctors and nurses have to make quick decisions balancing risk and uncertainty. If the oversight they will face is high, then there is a chance that doctors stick to a rigid set of steps, that might not really fit the current emergency. In his book, Kahneman writes about how this leads doctors to order unnecessary tests and procedures, more to cover themselves from liability than to truly help the patient, wasting time and money within the healthcare system.
For public decision-making, hindsight bias can be a disaster for public growth and development. The federal government makes loans and backs many projects. Like any venture capitalist firm or large bank making multiple investments, some projects will fail. It is impossible to know at the outset which of ten solar energy projects will be a massive success, and which company is going to go bust. But thanks to hindsight bias and the intense oversight that public agencies and legislatures are subject to, an investment in a solar project that goes bust is likely to haunt the agency head or legislators who backed the project, even if 9 of the other 10 projects were huge successes.
Oversight is important, but when oversight is subject to hindsight bias, the accountability shifts into high gear, blaming decision-makers for failing to have the superhuman ability to predict the future. This creates risk averse institutions that stagnate, waste resources, and are slow to act, potentially creating new problems and new vulnerabilities to hindsight bias in the future. Rauch, Katz, and Nowak in the posts I linked to above, all favor reducing transparency in the public setting for this reason, but Kahneman might not agree with them, arguing that closing the deliberations to transparency won’t hide the outcomes from the public, and won’t stop hindsight bias from being an issue. 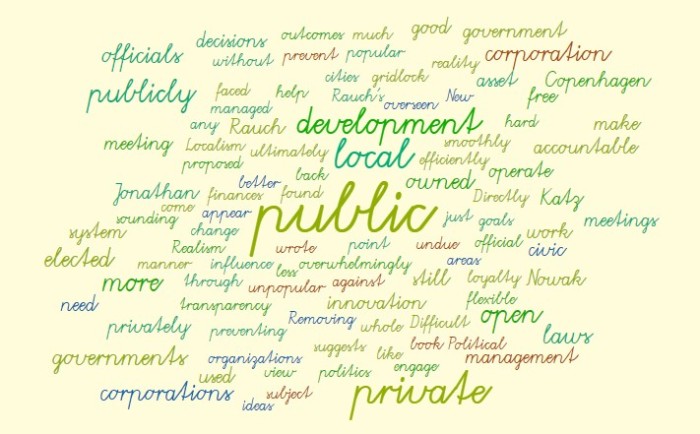 In the past I wrote about the importance of privacy in our politics from the point of view of Jonathan Rauch and his book Political Realism. We have almost no trust in government, and we frequently say things like, “sunshine is the best disinfectant,” but the reality is that politics is made much more complex when it is in the open. Difficult negotiations, compromises, and sacrifices are hard to do in open and public meetings, but can be a little easier when the cameras are turned off and political figures who disagree can have open and honest discussions without the fear of their own words and negotiations being used against them in the future.
In The New Localism, Bruce Katz and Jeremy Nowak acknowledge the difficulties faced by governments when open meeting laws force any discussion to be public. The laws come from a good place, but for local governments that need to move fast, make smart decisions, and negotiate with private and civic sectors to spur innovation and development, public meetings can lead to stagnation and gridlock. A solution proposed by Katz and Nowak is for local governments to authorize private corporations overseen by public bodies and boards to operate economic development areas and to take ownership of public asset management.
They describe how the city of Copenhagen has used this approach, “Copenhagen has found that by managing transactions through a publicly owned, privately driven corporation, operations run faster and more efficiently in comparison to how local government traditionally tackled public development projects.”
The private corporation running local development is publicly owned. It is still accountable to the local elected officials who are ultimately still accountable to the voters. But, the decisions are private, the finances are managed privately, and negotiations are not subject to public meeting laws. While the corporation has to demonstrate that it is acting in the public interest, free of corruption, it can engage with other public, private, and civic organizations in a more free and flexible manner to accomplish its goals. Leveraging the strengths of the private sector, publicly owned private corporations that put local assets to work can help drive change and innovation.
Directly calling back Jonathan Rauch’s ideas, these corporations create space for negotiations that would be publicly damning for an elected official. They also prevent elected officials from having undue influence in development and public asset management, preventing them from stonewalling a project that might be overwhelmingly popular in general, but unpopular with a narrow and vocal segment of their electorate. This prevents public officials from pursuing a good sounding but ineffective use of public resources to signal loyalty or virtue to constituents. Removing transparency and making the system appear less democratic, as Rauch suggests, might just make the whole system operate more smoothly and work better in terms of the outcomes our cities actually need.

Our society is all about disruption. I am writing this from Reno, Nevada, a city heavily influenced by San Francisco and Silicon Valley tech culture. Today number of Silicon Valley firms are spilling into Northern Nevada to take advantage of our great weather, beautiful outdoors, and minimal traffic. Along with theses firms comes the mindset of disruption. New technology and companies upending the way we drive, the way we access healthcare, and the way we communicate. Even our current president, and the Democrats main primary challenger in 2016, was cry for disruption, and opportunity to shake up politics and bring about a new way of doing business from the Oval Office.
Brookings Senior Fellow Jonathan Rauch is skeptical of this disruption, at least in the world of politics, and looks at why government exists and how good governance can be promoted in his book Political Realism. What Rauch finds is that the spirit of disruption in politics is actually nothing new. We have always had candidates who focused on a single issue that they wanted to change. We have always had activists who fought for a particular idea of what was good, often excluding concerns of other issues and areas. And ultimately, we have always had a political establishment to rail against and charge with fraud, corruption, lack of interest, and complain about as a out of touch with the will of the people.
What Rauch describes in his book however, is that politics is a long-term game. It extends beyond the current moment and exists in the future and in the past. Our decisions are shaped by what is politically possible and we use compromises as a tool to help us make decisions now that can be adjusted, rescinded, or strengthened in the future. What is important is not necessarily winning right now or introducing entirely new programs to completely tackle a problem today, but rather the importance lies in stability and positioning ourselves to constantly be able to improve and move forward. Our traditional system has done this with professional politicians who must please large and diverse groups of constituents. We have done this with compromise and a willingness to bend on principles to allow legislation to move through. As Charles Lindblom would describe it, we opt for incrementalism, slowly changing existing programs and policies because they already exist and have already been debated and implemented rather than spend all our time debating and fighting over new programs.
Contrasting this stable yet slow, lumbering, and apparently corrupting system is today’s vision of disruption. We want ideologically strong candidates who represent something greater than their own self-interest who will not bend on principles and will push for a great new society. This is a terrific vision, but it focuses on short term wins for the here and now at the expense of stability and long-term functionality. The system is composed of political amateurs, “Activists,” described by Rauch in his book as, “very different animals. They are less interested in extrinsic rewards than in advancing a public purpose, fighting for justice, experiencing the intrinsic satisfactions of participation. For them, issues are the essence of politics.” When the system is overwhelmed by the amateurs and activists, activity stops. Compromise is not possible and we cannot move forward with anything because we are all fighting for different ends. From time to time it may be necessary to flood a legislature with activists who represent a shift in the zeitgeist and will fight for things like racial justice, or a reduction in unnecessarily high taxes coupled with inefficient spending, or for a better healthcare system, but when this activist mindset becomes the norm, when every representative must be willing to die for their cause on every vote, the system cannot function and we cannot govern ourselves.
Sometimes the boring, the candidates who want office for the glory and not for the issue, and sometimes the flexible compromises are what we need for good governance. I would argue, and I think Rauch would agree, that most of the time these are the political leaders we need. They do not inspire great visions of a world where our political tribe dominates and where everything is about us and our priorities, but  they do work with others who are not like us and position the government to slowly move forward perhaps interrupted on occasion by groups that arise with strong preferences for a noble cause. Too many of these boring officials and we fail to meet the will of the people, but too few, and the system breaks and is open for demagoguery and encourages between-group meanness rather than between-group compromise. 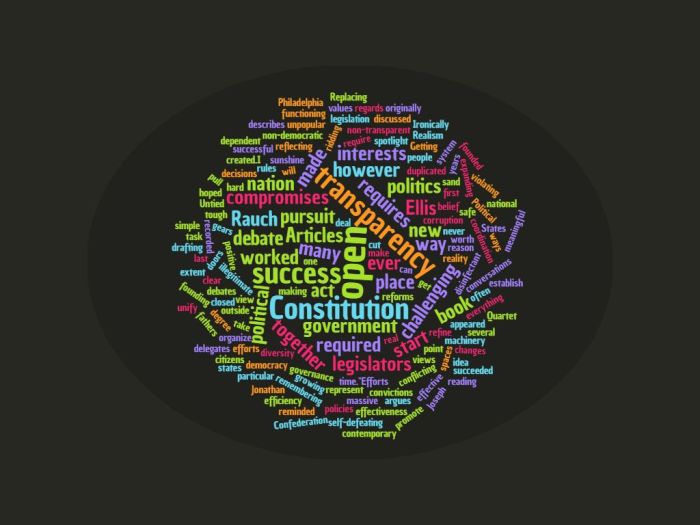