“A zero-sum game … leaves predation as the only way people could add to their wealth,” writes Steven Pinker in his book The Better Angels of Our Nature. One argument that Pinker makes in his book is that humans are social creatures because cooperation and living in a group creates more positive-sum scenarios for humans as opposed to zero-sum situations. Basically, when you have a group of people, the whole is greater than the sum of the parts. The collective abilities of people is greater than you might expect if you evaluated all the people and their individual skills on their own.
Pinker explains it this way, “a positive-sum game is a scenario in which agents have choices that can improve the lots of both of them at the same time.” If I am not very good at sewing, but have an excess of corn, and you are good at sewing but need food, we can engage in a trade where both of us win. I get new warm clothes for the winter, and you get food to survive the winter. We both are better off, but I now have warm food and can be productive outside by planting winter vegetables and you now have food and can continue to produce more warm clothes. The value we provided to the group we are a part of is greater than the clothes you sewed for me and the corn I gave to you.
Positive-sum games are much more complicated than the little example I just shared and are more common than we might think. We tend to simplify the world when we think about relationships between people and we often fall back on binary ways of thinking. We see the world as zero-sum because it is easier than seeing the complexities of the positive sum situations of our social world. In simplifid ways of thinking, people are either good or bad, you either win or lose, I either survive or a I die. The reality, of course, is that we don’t actually face a lot of zero-sum situations like these in our day to day lives.
“A key insight of evolutionary psychology,” Pinker continues, “is that human cooperation and the social emotions that support it, such as sympathy, trust, gratitude, guilt, and anger, were selected because they allow people to flourish in positive-sum games.” We are evolved for positive-sum games as social creatures. We are not evolved for zero-sum games as isolated individuals. We work together as teams, share surpluses, and work toward shared goals because most of our social interactions are positive-sum. Most of the day to day interactions we go through make the world better for everyone when we follow pro-social norms. We flourish in positive-sum games, and we often don’t even recognize how much of our lives are guided by such positive-sum moments. 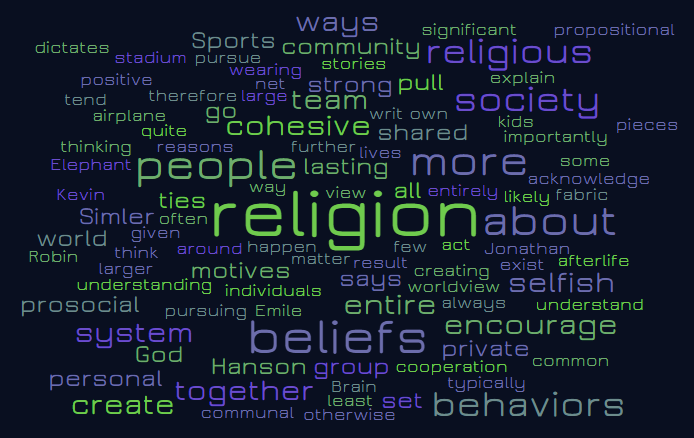 There are not many things that pull people together quite like religious beliefs. Sports pull us together when our kids are on the same team, when we are all in a stadium, or when two of us are wearing the right hat on an airplane, but those don’t make for strong ties that are lasting and uniting. Religion offers an entire worldview and set of corresponding behaviors that do create lasting ties between people who otherwise wouldn’t have much in common and wouldn’t likely interact for any significant time. Robin Hanson and Kevin Simler look at religion in their book The Elephant in the Brain to understand the ways that religious signaling, behaviors, and beliefs operate in ways that often go unnoticed.
They quote a few authors in a short section that stood out to me:
“Religion,” says Jonathan Haidt, “is a team sport.”
“God,” says Emile Durkheim, “Is society writ large.”
Simler and Hanson go on to explain what this community and larger social aspect of religion means given that we tend to think of religion more as a private belief system:
“In this view, religion isn’t a matter of private beliefs, but rather of shared beliefs and, more importantly, communal practices. These interlocking pieces work together, creating strong social incentives for individuals to act (selfishly in ways that benefit the entire religious community. And the net result is a highly cohesive and cooperative social group. A religion, therefore, isn’t just a set of propositional beliefs about God and the afterlife; it’s an entire social system.”
Religions typically encourage pro-social behaviors that get people thinking more about a cohesive group than about selfish motives. By pursuing these prosocial behaviors, people can gain more status and prestige in society. For selfish reasons then (at least to some extent), people pursue the religious dictates of their society in their own personal lives. As they do this, positive externalities may arise and may create a society that is more cohesive and supportive all around. This might not always happen, but having a shared system of understanding the world, our places in the world, and the stories about who we are and why we exist help to create the social fabric and social capital to further encourage cooperation and social cohesion. In a weird way, our selfish motives encourage religion, even if we don’t acknowledge it and assume that religion is entirely about personal beliefs.