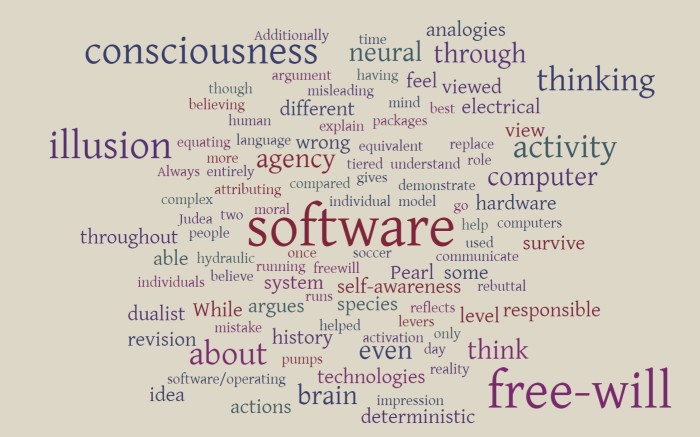 Judea Pearl uses soccer as an analogy to demonstrate the usefulness of freewill, even if it is only an illusion, in The Book of Why. Pearl argues that believing we have free will, even if it doesn’t exist as we believe it does, has been helpful for humans throughout our evolutionary history. He argues that being able to communicate about our intentions, desires, and actions through a lens of free will has helped us develop agency to improve our existence as a species and survive.
Pearl also views the illusion of free will as a two tiered system that helps our species survive through agency by attributing responsibility to individuals. He communicates this idea through the language of computers by writing, “when we start to adjust our own software, that is when we begin to take moral responsibility for our actions. This responsibility may be an illusion at the level of neural activation but not at the level of the self-awareness software.”
Pearl is arguing that our consciousness (software) is different from our neural activity (the computer hardware equivalent of the brain). In this sense, Pearl is viewing consciousness and free will as a dualist. There is the electrical activity of the brain, and the software (our thinking and self-awareness) running on top of that electrical activity. While we might not be able to directly change the neural activity and while it may be automatic and deterministic, the software packages it runs are not, they are in a way revisable, and we are responsible for those revisions. That is the view that Pearl is advancing in this argument.
I think this idea is wrong. I understand the dualist view of consciousness and use that model most of the time when thinking about my thinking, but I don’t think it reflects reality. Additionally, throughout human history we have used technological analogies to explain the brain. Always equating the brain and thinking to the best technologies of the day, we have viewed the brain as having some sort of duality about it. The brain was once viewed as hydraulic pumps and levers, and today it is compared to computerized hardware and software.
I don’t have a full rebuttal for Pearl. I recognize that our experience feels as though it is not deterministic, that there seems to be some role for free will and individual agency, but I can’t go as far as Pearl and actually assign revision responsibility to our consciousness. I agree with him that the illusion can be and has been useful, but I can’t help but feel that it is a mistake to equate the brain to a computer. I don’t truly feel that even within the illusion of free will we are entirely revision responsible for our consciousness (the software/operating system). I think that comparing us to a computer is misleading and gives people the wrong impression about the mind, and I’m sure that in the future we will replace the hardware/software distinction and thoughts with different and more complex technologies in our analogies.