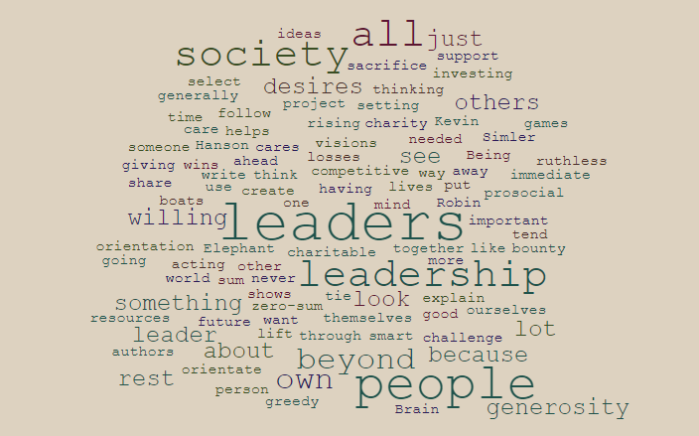 We tend to select leaders who see the world in a positive sum. We like leaders who can look ahead and project a way to create a rising tide that will lift all boats. We want leaders with empowering visions of the future and shared prosperity for all. We don’t want greedy leaders who are cunning, ruthless, and don’t care to share their bounty with the rest of us.

In The Elephant in the Brain, Kevin Simler and Robin Hanson tie ideas of generosity and charity to leadership. Being charitable, giving away of lot of money, and investing a lot of time into something, shows that a person is willing to put others first, is willing to sacrifice something of their own for the good of society, and genuinely cares about other people and not just themselves. The authors write,

“This helps explain why generosity is so important for those who aspire to leadership. No one want leaders who play zero-sum, competitive games with the rest of society. If their wins are our losses, why should we support them? Instead we want leaders with a pro-social orientation, people who will look out for us because we’re all in it together.”

Leadership is challenging because people don’t want to follow someone who is acting in their own self-interest. For all of us, it is a challenge to get beyond our own desires and to think about what is needed beyond our immediate concerns. To be a leader requires thinking beyond ourselves and having other people in mind when we decide what we are going to do, how we will use our resources, and generally how we will orientate our lives. We can’t be a leader if we are setting out to just be more than or better than others. People will see through us and our leadership will never take off. 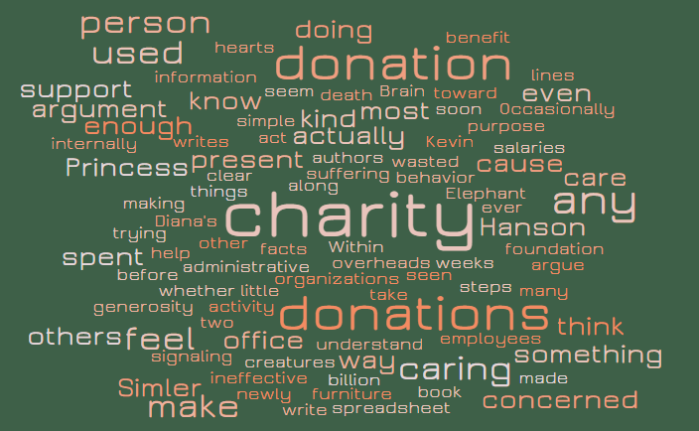 An argument that Kevin Simler and Robin Hanson present in their book The Elephant in the Brain is that when we donate to charity, we are signaling to others how caring and generous we are as humans. The actual good that our donation will do is secondary to being the kind of person who is caring enough and generous enough to help out with what ever cause we donate toward. It is not, the authors argue, the suffering of other people or creatures that we are concerned about, it is whether or not we think of ourselves and are seen by others as the kind of person who cares about it.
Simler and Hanson write, “Occasionally, we’re even happy to donate without knowing the most basic facts about a charity, like what its purpose is or how donations will be spent. “Within two weeks of Princess Diana’s death in 1997,” writes Geoffrey Miller, “British people had donated over 1 billion pounds to the Princess of Wales charity, long before the newly established charity had any idea what the donations would be used for, or what its administrative overheads would be.” When we analyze donation as an economic activity, it soon becomes clear how little we seem to care about the impact of our donations. Whatever we’re doing, we aren’t trying to maximize ROD [return on donation].”
If we were very concerned about making sure that we made a difference in the world with any money we donate, then we would take steps to ensure that our donation was going to make a difference. We would want to see a spreadsheet showing how the foundation used our money. We would want to know how many people were helped and in what way. We would want to know how much money went to the salaries of the employees of the charity, what money was spent on office furniture, and how much money was simply used as fixed office costs that didn’t benefit the cause we wanted to support.
Instead, the charities we donate to very rarely present any information along these lines. Our donations and charity are something we feel in our hearts, not something we think about in a rational way. Effective Altruists have argued that if you want to actually make a difference you can feel good about, if you actually want to show that you are a caring person, you should make an effort to understand how much good your donation is doing. We act as if that is why we donate, but then we don’t do any of the things (most of the time) that would support the argument that we care. A much more simple explanation of our donations is that we want to look good and feel good internally about our generous and charitable behavior, even when our generosity and charity is effectively wasted on organizations that are ineffective.