Capitalism has come under fire in the recent years in ways that I would not have predicted as I completed my college degree and entered the workforce. For so many years the idea of capitalism has been central to the American story and to American identity. It may not be perfect, but it has always been held above other economic systems as the best option available. However, recently, people have taken a new look at capitalism to ask if it can be maintained without the plundering of others. Can there be a reasonable sense of equity or equality within a system of capitalism? And in the United States, do we really have a meritorious system of capitalism, or is the American system of capitalism overrun with grift and graft?
Allowing people to flourish based on their own talents, allowing people to pursue their own interests, and to accumulate wealth can be a good thing, but it can also be done to excess. Like alcohol, chocolate cake, or Netflix, our pursuit of wealth can essentially be an addiction, and the costs can be born on all of society, not just on ourselves. Our actions and the systems and structures within which we operate have unintended consequences. These consequence, or externalities, can be positive or negative. Within capitalism, positive externalities include new technologies that improve our lives, more efficient markets which minimize waste, and hopefully more goods and wealth for everyone. But negative externalities related to capitalism include pollution, corruption, and extractive processes that harm individuals, communities, and environments.
In Letters From a Stoic, Seneca writes to his friend Lucilius, “I myself pray rather that you may despise all those things which your parents wished for you in abundance. Their prayers plunder many another person, simply that you may be enriched.”
Seneca is acknowledging that when one person gains resources, often times it is at the expense of another person. The goal of capitalism is for our economic system to be positive sum, meaning that everyone is better off in an exchange – a state known as a Pareto Efficiency. However, this is not always the case. Seneca sees exchanges, or maybe more precisely the accumulation of resources and wealth, as zero sum, meaning that there is a fixed amount of stuff, and that anything that one person accumulates is taken away from another person. This, in my opinion, is where so much of our discontent in the United States and across the globe with capitalism lies.
Seneca may not always be correct. There may be Pareto Efficiencies out there and there may be situations in which capitalism builds a positive sum economic system. But it does seem like moderation in our approach to capitalism and wealth accumulation is warranted. At a certain point, for us to have more necessarily mean that we are extracting wealth and resources from other places. Mining, logging, and cattle grazing can have damaging effects on local environments and communities, even if they do help develop industry or increase GDP in the places we take resources from. Beyond a certain level, continuing this trend is likely to make our lives marginally better, while potentially making the lives of others much worse. We should constantly ask ourselves if we are nearing that point, and try to limit our need for more stuff and more wealth when we are at sufficient level where the marginal gain for us is meaningless and effectively just plunders others for our own enrichment. It seems reasonable if we should ask whether limitless growth is really possible, or if capitalism ends in a state of plunder, in which nothing is left for a sustainable existence for everyone. 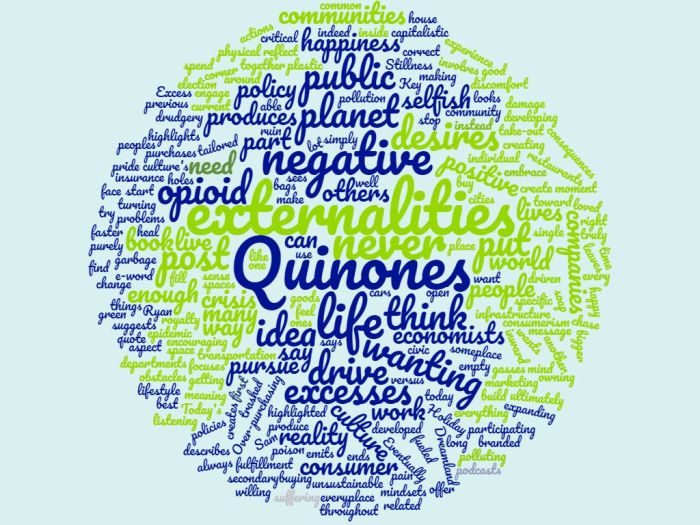 My previous post was about our desires to live a life that never involves any pain or suffering. We try to build a life for ourselves and our loved ones where every moment is happy, and where we never have to engage in drudgery, never experience physical discomfort, and never face any obstacles. Today’s post looks at another related aspect of our lives and mindsets that Sam Quinones highlights in his book Dreamland as part of our current opioid crisis: excesses.
Quinones is critical of our capitalistic culture that creates a message of buying things to find happiness, fulfillment, and meaning. The marketing departments of everything from soap companies, life insurance companies, to take-out restaurants suggests that happiness is right around the corner, as long as we are willing and able to buy more of what they offer. It is owning something bigger, having more, and expanding our consumption that is branded as a good life. But as Quinones sees it, “Excess contaminated the best of America.”
I studied public policy and I spend a lot of time listening to podcasts with economists. A common idea in the world of public policy and the mind of economists is the idea of externalities, secondary consequences of policies and peoples actions. Some externalities are positive, such as people developing a sense of civic pride after participating in an election, but many externalities are negative, such as green house gasses polluting the planet as we drive to and from work. What Quinones describes with the quote above, is the reality that our drive for excesses produces negative externalities that damage our planet and ultimately ruin the lifestyle that we chase.
By always wanting more, wanting it faster, and wanting it more tailored to our specific desires to make us feel like royalty, we have put ourselves in a place that is unsustainable. Our single use plastic bags have trashed our cities and open spaces. Having our individual cars to drive to everyplace we want to go emits more pollution than a well developed public transportation infrastructure. Over-purchasing consumer goods produces more garbage that has to go someplace.
This post has simply highlighted the reality that we live with negative externalities, and that our consumer driven culture is creating externalities which poison the planet. Quinones throughout his book focuses on the idea that our culture’s excesses have fueled the opioid epidemic by turning us inward toward our own wants versus encouraging us to think of others and how we can work together as part of a community. I think he is correct, and I think the space to start in making a change is by getting people to truly reflect on their lives, their purchases, and what they pursue. As Ryan Holiday put it in Stillness is the Key, “Eventually one has to say the e-word, enough. or the world says it for you.”
The way out of our opioid crisis, and indeed the way out of so many of our problems today, is to say enough to our own selfish desires. We need to stop the negative externalities that we produce when we purely pursue our own selfish ends, and instead we need to embrace our communities and put others first, to create more positive externalities which can heal our communities and fill the empty holes that consumerism leaves inside of us.