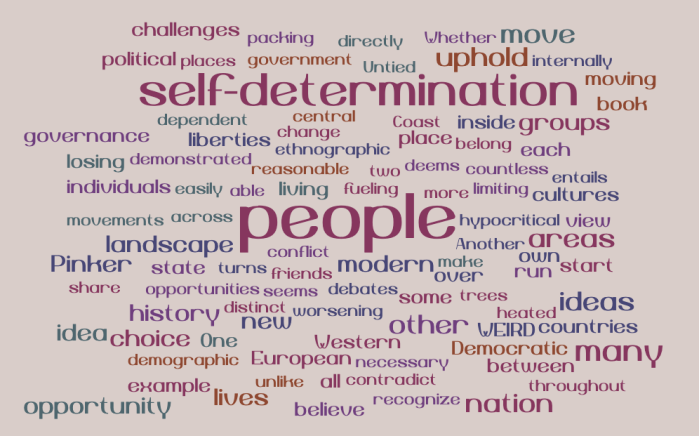 Modern people living in WEIRD cultures value consistency in the thoughts, behaviors, and actions of individuals. Joseph Henrich argues this is a strange phenomenon of WEIRD societies and that it hasn’t been a central feature of many cultures throughout history. One of the challenges of living in a society that deems you a hypocrite if you are not internally consistent on all issues is that we frequently run into paradoxical situations where we simultaneously uphold values that directly contradict. In the United States the most clear example is the contradiction between liberty and democratic governance. Democratic governance entails the creation of laws which reduce some personal liberties in order to defend other liberties.
Another example of paradoxes where our desires run into each other, as Steven Pinker notes in his book The Better Angels of Our Nature, is between self-determination and the idea of an ethnocultural nation state. The challenges created when these two ideas bump into each other are fueling heated debates and worsening refugee crises across the globe.
In the Untied States, and many Western European countries, we believe in ideas of self-determination. We believe that individuals have the power to improve their own lives by working hard, making smart decisions, and – if necessary – by moving to a new place to start over. The history of the United States is exactly that, a history of people packing up and starting over somewhere new. Whether it was the pilgrims on the East Coast or the countless people who successively moved west, the United States is defined by the idea of self-determination and moving to areas of opportunity.
But what happens when the people who exercise this self-determination and move to areas of opportunity are culturally distinct from the areas to which they move? That is the question that Pinker explores in his book. Regarding the differences of the people and the landscape in a nation, Pinker writes, “unlike features of a landscape like trees and mountains, people have feet. They move to places where the opportunities are best, and soon invite their friends and relatives to join. This demographic mixing turns the landscape into a fractal, with minorities inside minorities inside minorities.”
This is where our paradox arises. We want people to be free. We want to uphold ideas of self-determination. We want people to be able to move to areas of opportunity and start new lives. We don’t want people to be stuck in one place, dependent on government assistance and charity. But, historically the United States and Western European nations have demonstrated that we don’t want ethnographic minorities to be the ones who are self-determinant in this way. We want our countries, our states, and our cities to remain ethnoculturally cohesive groups (I don’t support this view, but some modern political groups certainly do).
Not all people share this mindset, but many do, and it is a large component of populist movements in the United States and Europe. The choice that many people seem to advocate for is limiting self-determination of people who do not belong to the ethnocultural majority. A choice that is easily pointed at as racist and hypocritical. The other option for the people who dislike the ethnocultural change is to uphold self-determination, but to give up the idea of an ethnocultural state. To me this seems to be the more reasonable choice, but for many, the fear of losing their group identity is powerful.
Ultimately, what we should recognize is that our modern nation states, the political units we generally view as ethnocultural groups, conflict with ideas of self-determination. If we want to uphold self-determination and make it easier for people to shape their own lives, then we may end up losing ethnocultural nation states. 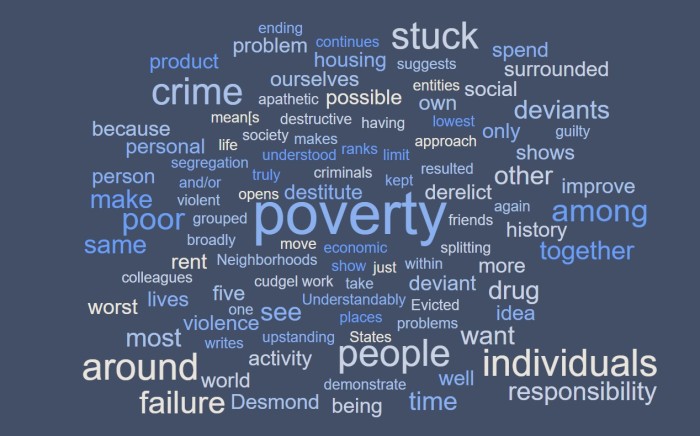 “Neighborhoods marred by high poverty and crime were that way not only because poverty could incite crime, and crime could invite poverty, but also because the techniques landlords used to keep illegal and destructive activity out of rental property kept poverty out as well,” writes Matthew Desmond in Evicted. There is an old idea I came across again recently that suggests that you are in some ways the product of the five people you spend the most time with. Who you are around and what kind of people they are like makes a difference in the person you become. Usually, in the United States, this is presented to us as a warning to be responsible for having upstanding friends and colleagues who will make us better people. But this sentiment can also be understood not as a rallying call for personal responsibility, but as a cudgel against personal responsibility.
We are not our own independent entities free from societal influence and pressures.  The world around us shapes how we see that very same world. It influences what we see as possible, moral, acceptable, and excusable. It defines our horizon and opens or closes certain doors and directions. It challenges the idea that our life is entirely within our own hands. Desmond’s quote above shows that poverty and crime run together, and it shows that if you are poor, you are probably stuck around criminals, meaning that the poorest among us are stuck among the worst among us. If the saying that you are the people you spend most of your time around, then those in poverty are stuck becoming deviants.
“This also mean[s] that violence, drug activity, deep poverty, and other social problems coalesced at a much smaller, more acute level than the neighborhood. They gather[ ] at the same address,” continues Desmond.
Our market approach to housing means that those who have a history of not making rent payments, who have a history of drug abuse or violence, and those who have made poor decisions in the past are grouped together, often ending up in the same household splitting rent. If you are the product of the five people around you the most, then being surrounded by only other derelict or deviant individuals cannot possibly make you anything other than the worst version of yourself possible. None of us would want to live surrounded by poor, defeated, and destitute individuals. If we are honest with ourselves, we can see how being stuck in such a situation would make it effectively impossible for us to pull ourselves up by our bootstraps, unless we are a truly remarkable person.
Our failures of housing policy have resulted in a dramatic economic segregation. Understandably, all of us as individuals want to move away from places of crime, drug use, and poverty (I am guilty here as well). We want to limit the amount of time we have to interact with the deviant and derelict, but in doing so, we cluster those poor, violent, and/or apathetic individuals together, creating the conditions for a downward spiral for anyone who gets caught amongst our lowest ranks. This is not a problem of just the individuals stuck in these situations. It is a problem and failure of society more broadly. A failure to ensure that poverty does not pit one solely among deviants. A failure to give those deviants a safe place to take steps to improve their lives. And a failure to demonstrate social responsibility to work with the destitute to show them that they are valued and can indeed improve their lives. 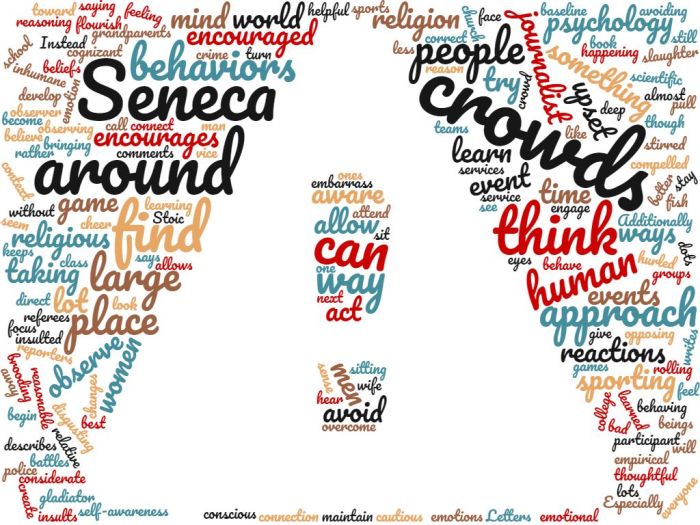 I remember taking a psychology class in college and learning about the ways that human psychology changes when we are in large crowds. We are less likely to call the police when we see a crime being committed if we are around lots of other people in a public place. We become more extreme in our actions and behaviors than we would be on our own. In a sense, we give up our conscious reasoning and begin to act more like fish swimming in a school, reacting to everyone around us and not maintaining our individuality.
In his book Letters From a Stoic, Seneca writes about crowds, generally encouraging the man he was writing to stay away from them. The reason why Seneca encourages avoiding crowds is because they seem to create a pull toward vice in a way that being on ones own does not. Especially, Seneca says, we should avoid the games – as in gladiator battles where he describes the inhumane way that men and women at the event encouraged the slaughter of other human beings.
I think Seneca is correct in saying that being in large crowds encourages bad behaviors and can push us to act in ways that we otherwise would find abhorrent. But, I don’t think it is necessary for us to withdraw from crowds entirely. I think we should still participate in crowds and allow ourselves to be engaged with our culture, but we should approach crowds with a mindset that keeps us aware of what is taking place around us and how we are acting. Effectively, I think we should approach crowds with the mind of a journalist.
I work a lot of sporting events assisting the media department at the University of Nevada. I am deeply upset by how quickly men and women at sporting events will turn to insults profanity when they are upset by something that happened in a game. I feel almost as though I was the one insulted when I hear disgusting comments hurled at opposing teams and referees. Because I engage with reporters at the game and because I sit in a place where I cannot cheer, I have learned to look at the behaviors around me and to observe the event without feeling compelled to allow myself to be overcome with emotion and behave in a way that would embarrass my grandparents if they were sitting next to me.
Additionally, I am not religious but I do attend church services from time to time with my wife. I find that observing the service and bringing the mind of a journalist with me is helpful in that it allows me to learn, to try to connect dots between religion and what I try to develop as scientific empirical beliefs, and to observe how human connection can flourish in a religious context. Instead of brooding and rolling my eyes in the face of something I do not believe, I find that I can be more thoughtful and considerate if I am aware of my emotions and reactions and focus on being an observer rather than a direct participant. Both in the world of sports and in the world of religion, I find that I can be around crowds better when I approach the crowd with deep self-awareness and do my best to be cognizant of what is happening around me, the emotional reactions that are stirred up, and how other people are behaving relative to the baseline that I think is reasonable to maintain. I am cautious around crowds, but I don’t have to avoid them as Seneca encouraged, because there is a lot to learn about ourselves from large groups of people.