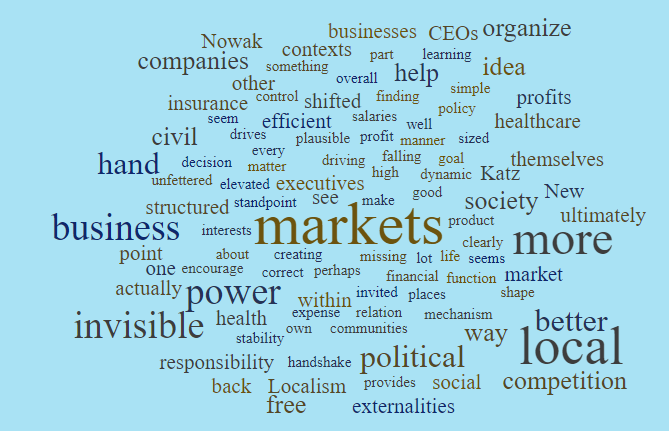 I tend to be a bit hard on the idea of free markets. I grew up learning about the invisible hand and in a family that started a business and did well. I (mostly because of my family’s business) appreciated the idea that setting up a market and running a business was a good thing from the standpoint of finding an efficient point at which to price a product or service. Today however, perhaps as a result of my healthcare interests, I see numerous examples of markets falling short of the goal we establish in our minds based on the idea of the invisible hand.
Rather than seeing markets find an efficient point where competition drives efficiency and provides everyone with better products at better prices, I see too many externalities from free markets and unfettered competition. We are producing a lot of greenhouse gasses that harm life on the planet. CEOs are getting better (maybe deservedly so) at capturing greater salaries from their companies, driving economic inequality, and straining social stability. Private health insurance markets seem to drive overall healthcare costs up at every turn, and no one seems to be able to understand how health insurance actually works. The free market, and open competition, does not appear to function as clearly and organize as succinctly as my simple understanding from high school would have suggested.
What is missing is something that ties markets and capitalism back into civil society. Bruce Katz and Jeremy Nowak, in their book The New Localism, suggest that shifting political power and decision making back to local contexts within cities and metropolitan regions can help correct these problems. They write, “New Localism is a mechanism for converting the self-organizing power of markets and civil society into structured fiscal and financial resources, and ultimately, political power.”
National and multinational sized corporations often have a responsibility to maximize profits for shareholders or top executives. Their huge scale means that any local or regional place is less important for them, since there are always markets in other countries and other states. However, when local governments exert more control over such companies, the local contexts begin to matter more. When CEOs and executives from these companies are invited in to help shape policy beginning at the local level, and are held accountable to the local individuals in the places where their markets are strong or where their employees actually live, the business motives that encourage negative externalities are shifted. The dynamic becomes one where civil responsibility is elevated, and ultimately political power is shifted in a way to help organize business in a more responsible manner in relation to the local context.
The lesson that Katz and Nowak share is that businesses on their own are encouraged to organize themselves in a way that maximizes profit at the expense of the local communities in which they operate. By giving localities more power and better networked governance structures, big businesses can instead be a cooperative part of the political and social structure, re-organizing themselves within society in a way that helps make Adam Smith’s invisible hand dream a little more plausible. The Invisible hand in this model is not so invisible, but more of a structured handshake creating a commitment to more than just profits.