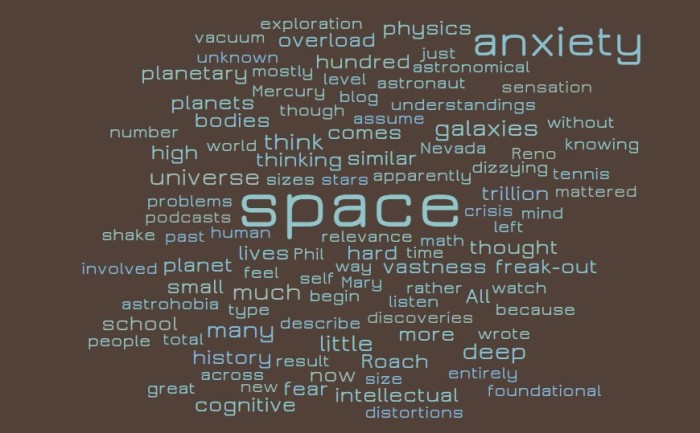 When I was in high school my physics class was hard for me because I had a hard time thinking about planetary bodies. I could do the math and understood the concepts, but thinking about space was just a little too much for me. I would begin to feel a panicky and dizzying sensation when I thought about astronomical sizes, about other planets, and about the total number of galaxies and planets in the universe. Whenever we had physics problems that involved large planetary bodies I had to push past this space anxiety and think about hypothetical tennis balls rather than Mercury or Jupiter.
Today I have mostly gotten over my space anxiety. I can watch Crash Course Astronomy with Phil Plait and read his blog. I can think about space, listen to podcasts about deep space, and imagine the huge vastness of space without spiraling into an existential crisis. But I have never been in space before, and according to Mary Roach, many astronauts experience a similar type of space anxiety, but on an entirely new level once they have left earth’s atmosphere.
Roach writes, “every now and then, you do come across astronauts who describe an anxiety unique to space. It’s not fear (though apparently astrohobia, fear of space and stars, does exist). It’s more of an intellectual freak-out, a cognitive overload. The thought of one hundred trillion galaxies is so overwhelming, wrote astronaut Jerry Linenger.”
Space anxiety for me occurred in a similar way, but I was not actually venturing into deep space. I was only imagining deep space from a small classroom in Reno, Nevada. I assume that the intellectual freak-out that comes form knowing how small and temporary our lives are compared to the universe itself is much worse when floating in the vacuum of space, confronted with a view of the world from the outside.
The cognitive overload that comes from our discoveries and exploration of space is the result of the size distortions of our lives. For nearly all of human history the space beyond our planet was unknown and unimportant. All that mattered was what was on Earth, but we now know that there is so much more out there. So little of what takes place on our planet will ever matter in the great vastness of space. So little of what humans throughout history have believed seems to be of any importance or relevance when we think about a hundred trillion galaxies. For my high school self, for some astronauts, and for many many people, these considerations don’t inspire awe and wonder, but trigger anxiety, overwhelm the mind, and shake foundational beliefs and understandings of life and the universe.