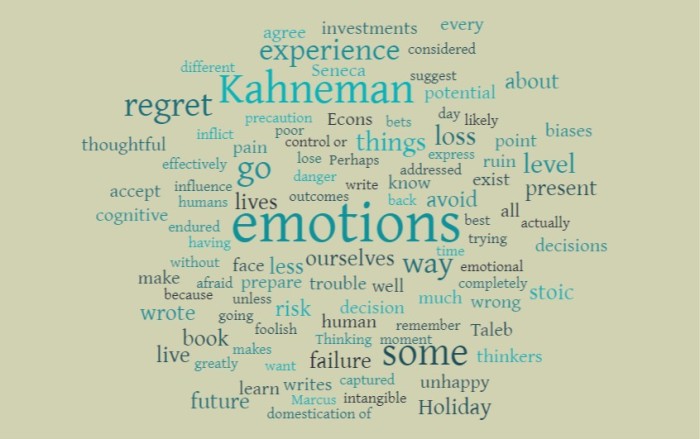 “We spend much of our day anticipating, and trying to avoid, the emotional pains we inflict on ourselves,” writes Daniel Kahneman in his book Thinking Fast and Slow. “How seriously should we take these intangible outcomes, the self-administered punishments (and occasional rewards) that we experience as we score our lives?”
Kahneman’s point is that emotions such as regret greatly influence the decisions we make. We are so afraid of loss that we go out of our way to minimize risk, to the point where we may be limiting ourselves so much that we experience costs that are actually greater than the potential loss we wanted to avoid. Kahneman is pointing to something that stoic thinkers, dating back to Marcus Aurelius and Seneca, addressed – our ability to be captured by our emotions and effectively held hostage by fears of the future and pain from the past.
In Letters from a Stoic, Seneca writes, “Why, indeed, is it necessary to summon trouble – which must be endured soon enough when it has once arrived, or to anticipate trouble and ruin the present through fear of the future? It is foolish to be unhappy now because you may be unhappy at some future time.” I think Kahneman would agree with Seneca’s mindset. In his book, Kahneman write that we should accept some level of risk and some level of regret in our lives. We know we will face regret if we experience some type of failure. We can prepare for regret and accept it without having to ruin our lives by taking every possible precaution to try to avoid the potential for failure, pain, and loss. It is inevitable that we are going to lose loved ones and have unfortunate accidents. We can’t prepare and shield ourselves from every danger, unless we want to completely withdrawal from all that makes us human.
Ryan Holiday wrote about the importance of feeling and accepting our emotions in his book The Obstacle is the Way. He wrote, “Real strength lies in the control or, as Nassim Taleb put it, the domestication of one’s emotions, not in pretending they don’t exist.” Kahneman would also agree with Holiday and Taleb. Econs, the term Kahneman and other economists use to refer to theoretical humans who act purely rationally, are not pulled by emotions and cognitive biases. However, Econs are not human. We experience emotions when investments don’t pan out, when bets go the wrong way, and when we face multiple choices and are unsure if we truly made the best decision. We have to live with our emotions and the weight of failure or poor investments. Somehow, we have to work with these emotions and learn to continue even though we know things can go wrong. Holiday would suggest that we must be present, but acknowledge that things wont always go well and learn to recognize and express emotions in a healthy way when things don’t go well.
Kahneman continues, “Perhaps the most useful is to be explicit about the anticipation of regret. If you can remember when things go badly that you considered the possibility of regret carefully before deciding, you are less likely to experience less of it.” In this way, our emotions can be tools to help us make more thoughtful decisions, rather than anchors we are tethered to and hopelessly unable to escape. A thoughtful consideration of emotions, a return to the present moment, and acceptance of the different emotions we may feel after a decision are all helpful in allowing us to live and exist with some level of risk, some level of uncertainty, and some less of loss. These are ideas that stoic thinkers wrote about frequently, and they show up for Kahneman when he considers how we should live with our mental biases and cognitive errors.